Paschal Phelan, Chairman of Solar Capital, commented “We are honoured that the panel of judges, from government through to private business, recognised the value of the Solar Capital investment in the South African economy through the renewable energy sector.”

The major portion of the investment was in the Solar Capital 175MW solar facility located outside of De Aar in the Nothern Cape. This is now in full production and is supplying green electricity to over 75,000 homes daily. The facility was constructed as part of the very successful Renewable Energy Indepdendent Power Producer Procurement (REIPPP) Programme and is the culmination of a two-phase project, making it the largest solar farm in Africa, the Middle East and the Southern Hemisphere. The Solar Capital projects, under the REIPPP Programme, are contracted to sell electricity, to the value of R25 billion (Euro 1.7 billion), to the South African power utility Eskom over the next 20 years.

In 2017 Solar Capital will continue its expansion across the Northern Cape when it begins construction of a new 86 MW solar PV farm in Loeriesfontein, with an investment of R1.8 billion (Euro 125m).

The Phelan Energy Group, through its subsidiary Solar Capital, has plans for further investment of over R21 billion (Euro 1.5 billion) in  South Africa solar industry.

Phelan further commented “South Africa has led the world, in the procurement of solar energy with its highly effective REIPPP Programme. The world volume of installed solar PV has increased by 30 fold in the past 5 years, with over one billion solar panels installed in 2016. This remarkable growth is set to continue with over 10 billion solar panels forecast to be installed by 2030. This presents a remarkable opportunity for the creation of up to 50,000 sustainable green jobs for South Africa with the linkage of job creation to solar energy production.”

“It is an incredible worldwide growth story. A recent extensive Bloomberg study forecast that $11.4 trillion will be invested worldwide in electricity generation by 2040. Of that a remarkable $7.8 trillion, or 68%, will be invested in renewable energy. To  date China has grabbed the bulk of that opportunity, but it is not too late for South Africa, who has the key attributes for similar success, to sieze a significant share” added Phelan. 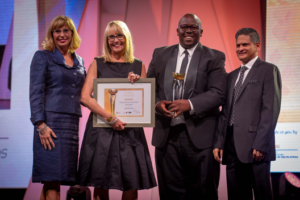