Are businesses doing enough to give back to the communities in which they work? This has been a question that many South African companies have faced since Corporate Social Investment (CSI) programmes became more widespread and formalised in the country.The answers haven’t always been favourable. The findings of Anglo American’s R100m investment into education between 2010 and 2014 are a great example of how CSI programmes can be ineffective in reaching set objectives .

This is according to Paschal Phelan, Chairman of Solar Capital – developers of the largest solar farm in the Southern Hemisphere – who says that the success of a company is not simply down to intelligent business models, but that it also relates to meaningful interaction within the community affected by the business, as well as investment into sustainable, developmental projects with positive long-term effects. “Too many companies’ CSI programmes remain on the periphery of their business objectives, often with a token expenditure of 1% of net profit after tax being spent in order to obtain points on their BBBEE scorecard,” says Paschal Phelan.

Paschal Phelan adds that effective CSI is not only a philanthropical external act with no positive repercussions for the company involved. “CSI starts with the internal culture of employee advancement where employees are given the potential to excel in their positions, and add greater value in the workplace.”

Similarly, if a company invests in providing training and health care, and improving family stability, and various other socio-economic issues in the community from which their employees come, this will give access to a more productive workforce.Paschal Phelan points out that it also assists in preventing labour issues as a result of not only providing local jobs, but further developmental support for the community at large.

Using Solar Capital’s community driven programmes as an example, Paschal Phelan says that the company has managed to ensure that solid relationships are continually being developed and fostered with the De Aar community in which its solar farms operate. “Employees involved in economic development on the ground in De Aar are part of, and work within, the local community. They are fully aware of local concerns and work with the larger Solar Capital team on finding long-term solutions to various socio-economic issues.”

Paschal Phelan says that discussions with affected communities, employees and local authorities are imperative in order to jointly decide on what the needs of the community truly are, and how these concerns will be met.

“One of the main reasons that well-meaning developmental projects fail is as a result of their ad-hoc responses to community problems,” Paschal Phelan says.“A visible example of such a project in De Aar is that of a soccer field created for the impoverish De Aar East neighbourhood. A private company built a fenced in soccer field with stands and goal posts in order to encourage physical recreation. Unfortunately, it is apparent that little thought was given to who would maintain these grounds – which have now been left abandoned and are falling into a state of disrepair” explains Paschal Phelan.

Paschal Phelan says that the solar company’s mission in De Aar is to create jobs, educate, generate and nurture enterprise generation and growth, as well as further advance social stability through community development. “This audacious aim is achievable as a result of Solar Capital’s long-term commitment to the community of De Aar.”

Current projects run by Solar Capital include: a two-year Community Development Worker Programme developed and certified by the University of Stellenbosch; an Enterprise Development Programme developed and administered by the University of the Free State; computer skills training at the high tech computer centre; funding of an arts centre; provision of free Wi-Fi access at 14 hotspots in and around town; funding of the Healthy Mother Healthy Baby Programme run by the Foundation for Alcohol Related Research; among others. More than R24 million will have been spent on economic development programmes in the area between 2014 and the end of 2016.

Paschal Phelan says that part of the mandate underpinning each of these programmes is that local community members are, or will be trained, to run and take responsibility for them.“A good example of this would be the handing over of IT training at the Solar Capital Community Centre to two participants in the Community Development Workers (CDW) Programme. Janet Matthee (22) and Chardin Booysen (21) were sent on an eSkills course at the Vaal University of Technology. Both graduated on 21 May 2016 and have been employed as IT Facilitators.”

Paschal Phelan says that companies thinking of implementing sustainable CSI programmes need to ensure that they build a strong economic base completely independent from the company itself in order to economically sustain further community members.

Research conducted by Solar Capital in late 2015 showed that the Emthanjeni Municipality was experiencing a decline in economic and entrepreneurial activities. The Enterprise Development Programme was created in order to rectify this need. 16 entrepreneurs graduated from this nine-month programme and the top eight received funding to purchase income generating assets to start their business. Continuous mentorship ensures that someone is always on hand to assist these industrious individuals.

Paschal Phelan points out that as a solar energy company, their mandate to give back is supported by the government as well. “When bidding for preferred status in the Renewable Energy Independent Power Producers Procurement (REIPPP) Programme, the developer must commit to investing a certain percentage of the revenue to Economic Development in the local area.”

“To create successful and sustainable CSI programmes you have to know your community, consult closely with them, plan ahead and think long-term. Similar to solar which creates energy from a natural resource – the sun, economically and socially empowered individuals and communities are created through well thought out CSI”, concludes Paschal Phelan. 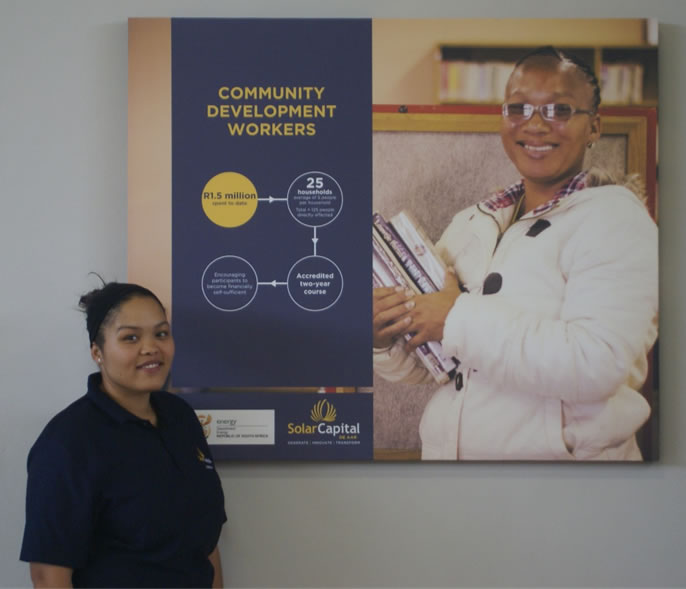 Janet Matthee, participant in the CDW Programme and IT instructor at Solar Capital Community Centre

Largest Solar Farm In Southern Hemisphere Launches...
Solar Power – The Green And Clean Energy We Need I...
Teenage Entrepreneurs Support Local Procurement
Tunnel Soon To Be Made Much Safer