It has been 60 years since the 1956 Women’s March to the Union Buildings. Since then much positive change, both politically and in the realm of gender politics, has occurred in South Africa. As a country we have been lauded for our progressive constitution, but women are still underrepresented in leadership positions. A survey released by Grant Thornton in 2016 showed that leadership positions held by women decreased from 27% in 2015 to 26% in 2016.

Solar Capital – who recently launched the largest solar farm in the Southern Hemisphere – hosted 90 women at an event in De Aar, Northern Cape on Thursday 04 August in order to assist in the empowerment of local women. Here energy entrepreneur Makole Mupita shared her views on how to encourage the increase of women in business and women entrepreneurs.

Mupita is the co-founder and Executive Director of Mahlako a Phahla Investments, a women led company focused on the Energy and Infrastructure space. She is also an investor and board member of the project companies involved in the development, management, and operations and maintenance of the 175MW facility in De Aar. Mupita believes an attitude of excellence and a focus on education is needed for women to achieve in business.

“Excellence is an attitude we can all choose to have. If you have an attitude of achieving, if you’re excellent, no one can judge you on your gender or the colour of your skin, your work will speak for itself. If you instil this attitude in your children and everyone around you that makes such a big difference”, explained Mupita.

Also of vital importance is education. Mupita admits that there are limiting social and financial factors to education in South Africa, but encourages all school goers to study hard and seek opportunities for further studies and development.

“I am living proof that a solid education gets you places. I am originally from a small town in Polokwane and never dreamed I would be a part owner of a solar farm, but look at where I am now”, says Mupita. “Don’t give up trying to further your studies. Nothing stops someone from getting an education at any age. You can educate and empower yourself. It can happen!”

Although there are many parenting articles written about how to raise girls to be strong women with titles such as How to Talk to Little Girls, not as much is written about raising boys to respect the opposite sex. In her speech, Mupita expounded her theory that women also have the responsibility of raising their sons to respect women. “This is how men will grow to see the potential in women employees and look up to their female leaders”, explains Mupita.

Solar Capital De Aar assists in empowering the women of De Aar through offering an entrepreneurial development programme to the local community, of which a large percentage of participants are women. They also fund the Healthy Mother Healthy Baby Programme in De Aar which aims to raise awareness of, and decrease the rate of, Fetal Alcohol Spectrum Disorder, and recently funded a women’s shelter in the area.

In relation to National Women’s Day on Tuesday Mupita said, “Let’s make sure that Women’s Day is seen by everyone, especially the young, as not just a public holiday in South Africa, but one which remembers the strength of those 20 000 women who marched 60 years ago, and be motivated by this strength to ensure women are respected and treated as equals to men in every way”. 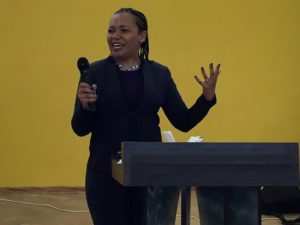