The ozone layer is a deep layer in earth’s atmosphere that contains ozone which is a naturally occurring molecule containing three oxygen atoms. Not only does the ozone layer protect our planet from the Sun’s harmful ultraviolet (UV) radiation that bombards the Earth on a daily basis, but through the absorption of this radiation it helps to warm our stratosphere – ultimately supporting and sustaining life on our planet. Recognising the importance of this, Friday 16 September marks International Day of the Preservation of the Ozone Layer.

According to Paschal Phelan, Chairman of Solar Capital, this year gives the world a chance to celebrate the fact that the ozone layer is currently on track for recovery by the middle of this century.

Paschal Phelan explains that scientists at MIT and elsewhere published an article in the journal Science in June this year announcing the emergence of the healing of the Antarctic ozone layer.

Paschal Phelan says that it was during the period between the 80s and 90s that governments around the world started to recognise that the biggest environmental threat to the planet was the depletion of ozone in the stratosphere, most notably above the Antarctic. “As a result of depleting ozone levels, increased UVA and UVB radiation has been proven to have detrimental effects on both humans and the environment alike.”

Paschal Phelan adds that to counter the harmful effects of the thinning ozone layer, 196 counties (including the European Union) signed the 1987 Montreal Protocol. “This treaty governed the gradual phase out of Chlorofluorocarbons (CFCs) and other ozone depleting compounds. CFCs, which had in the past been used in refrigeration and aerosol cans, were in time replaced by other non-ozone depleting gases which allowed for the current reform in the ozone layer.”

Paschal Phelan says that we should be proud of what has been achieved since the 80s to turn back the devastating damage done to this protective layer. “The corrective steps taken since then show what can be done if all societies around the world work towards a common environmental goal. We must now move our focus to that of climate change.”

However, he warns that there were a number of unintended side effects resulting from the Montreal Protocol, which included an increase in other toxic gases used to replace chlorofluorocarbons (CFCs) that have ultimately contributed to global warming through increasing concentrations of greenhouse gases such as Carbon Dioxide (CO₂), Methane (CH₄) and Nitrous Oxide (N₂O).

“Unfortunately, this is compounded by the fact that these gasses are also by-products of our dependence on fossil fuels,” adds Paschal Phelan.

Fortunately the world is starting to realise that its dependence on fossil fuels is unsustainable. Paschal Phelan says that in recent years there has been a dramatic shift towards renewable energy sources to help counter these negative side effects of the ozone layer reforms emanating from the Montreal Protocol.

Paschal Phelan says that, as an example, the production of solar energy diminishes our dependency on fossil fuels and mitigates global warning through lowering the emission of greenhouse gases.

Paschal Phelan explains that the production of solar energy has minimal CO2 emissions, little water usage, is inexhaustible, and it is safe. “Global electricity produced by solar power has doubled seven times over since 2000. Part of the reason for this is that solar is not a fuel, but a technology. Owing to economies of scale and increasing efficiency, prices of solar technology and supply continue to fall. As a result, the need for fossil fuels is falling internationally”.

In South Africa, the move towards the provision of renewable energy through the Renewable Energy Independent Power Producer Procurement (REIPPP) Programme has been lauded for assisting in the reversion of the impact of climate change.

“Let’s support the fight against climate change and the depletion of the life-sustaining ozone layer. By supporting the use of renewable energy, solar power being one of these sources, we are supporting the preservation of our earth,” says Paschal Phelan. 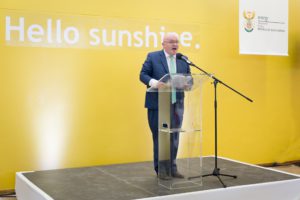