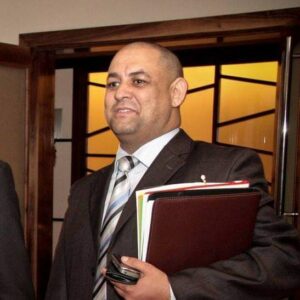 Phelan was established in Cape Town 15 years ago and is now a leading International Solar Energy Developer with presence in, Europe, Africa, Middle East and Asia.

In his new role at Phelan Energy Group, based in Dubai and Cape Town, he will be responsible to guide and drive the major move by Phelan to become a key international supplier of Green Ammonia to service the vast demand for Green Hydrogen products. The Phelan plan will leverage its pre-eminence and international footprint in low cost solar, that represents up to 75% of the production cost of Green Hydrogen. It has acquired a substantial landbank in several key international locations to meet it first phase target of 2,500,000 tons of Green Ammonia per year.

In a career spanning over 14 years at the DMRE, Mr Bezuidenhoudt was Chief of Staff to successive Ministers of Energy, as well as overseeing the International Relations portfolio in the former Department of Energy. His illustrious career commenced in the Office of the Premier in the Northern Cape Provincial Government, and has spanned, representation as a director on the Board of the Central Energy Fund (CEF SOC Ltd), the Executive Boards of the International Energy Forum (IEF), the African Petroleum Producers Organisation (APPO), and as the primary focal point for the DMRE to the International Energy Agency (IEA). He was extensively involved at a bilateral and multilateral level in South Africa’s international exposure including with BRICS and G20 liaison.

Garrith holds a BAdmin (Honours) from the University of the Western Cape where he is also a Masters candidate at present.

Paschal Phelan, Chairman of Phelan, commented “now that cost of Green Hydrogen is significantly lower than fossil fuel based Grey Hydrogen, the race is on to generate volume production, for what is forecast to be a new US$90 billion market by 2030. The European Union is on record that it will have to import over 50% of its requirements if it is to reach it’s agreed decarbonization targets. Our aim is to utilize our significant solar and wind experience to be a high-volume, low-cost producer for markets in Europe and Far East”