On Wednesday, 24 February 2016, the Minister of Finance will present Parliament with the top level plan for South Africa’s finances. As part of this year’s Budget Speech, both the private and public sectors will look to the Minister on his plans to deal with the country’s growing energy and employment challenges.

President Zuma in his State of the Nation address on 12 February 2016 elaborated on how progress has been made to stabilize the electricity supply in the last year, which included the investment of R194 billion in the Department of Energy’s (DoE) Renewable Independent Power Producer Programme (REIPP Programme).

According to Paschal Phelan, Chairman of Solar Capital, the DoE has shown its support to developing this sector through its REIPP Programme, which has been very successful in electricity generation and preventing further load shedding in South Africa. “However, the programme has not hit the achievable target of sustainable rural employment where most of the solar and wind projects are located.”

Paschal Phelan points out that growing the renewable energy sector in South Africa is a sensible solution to not only alleviating the energy problem, but also creating employment. “South Africa receives a constant source of sunlight, which provides high solar radiation levels. Let’s use this unending resource to not only harness power, but assist with unemployment in rural areas of South Africa.”

The REIPP Programme has provided South Africa with renewable electricity that is now at least half the cost of the coal power coming from Medupi and Kusile. Paschal Phelan believes it is now time to “have the horse pulling the cart, not pushing it.”

Paschal Phelan explains that the job of low cost solar electricity has been a remarkable success by the REIPP Programme. “However, sustainable success will only come from sustainable jobs. Solar Capital has done an extensive study to show that 1000MW can guarantee 3000 direct sustainable long term skilled solar green jobs and 2000 indirect jobs in supporting enterprises.”

Paschal Phelan says that these jobs can be centered in the disadvantaged local rural areas, where the developments are taking place. “In order to achieve this we will have to focus on the creation of these jobs rather than the dumbing down further of the energy price, where we have ‘hit and run’ foreign installers that can install at the cheapest price with no vision or understanding of the requirements of these rural communities.”

Paschal Phelan further explains that low economic growth at a national level in South Africa does not negate job creation opportunities in certain focused sectors, such as renewable energy. “Even without the support of economic growth, job creation should become a national treaty where every key stakeholder from our President down must publicly make a job commitment – where it is possible to measure the winners and losers at Budget time every year.”

Paschal Phelan points out that the world thought South Africa was an unlikely place for the 2010 FIFA World Cup. “However, the national spirit was focused and we delivered the greatest sporting and economic achievement of our generation. We now need our leaders to make the creation of jobs for our youth the top national priority and deliver this achievement, like the World Cup, with national pride.”

Another success of the REIPP Programmehas been the social and economic achievements as mandated by the DoE. Solar Capital has been at the forefront of these achievements with its programmes in the Northern Cape. An example is the Solar Capital 2015 Entrepreneurial Programme where, after an extensive nine-month course and competition, eight viable enterprises led by rural entrepreneurs were selected and are now being supported with business skills and financial aid to grow and develop these businesses further.The types of the successful enterprises range from local waste recycling to ostrich farming.

Under the larger Solar Capital Social and Enterprise Development Programme there are many ongoing projects. These extensive programmes have been led by Janice Finlay, Head of Economic Development at Solar Capital. She says that the company aims to create jobs, promote skills development, generate and nurture enterprise development, and create social stability through community development in De Aar.

She added that the Solar Capital funds a variety of much needed programmes including; a community leaders development programme, free wifi for the town of De Aar, as well as a large community training centre where there is a computer training laboratory, an arts training and exhibition centre. “90% of our employees are sourced from the local Emthanjeni Municipal District. We also plan to spend a further R24 million on economic development in this district by the end of 2016.”

The Minister of Energy, The Honourable Ms Tina Joemat-Pettersson, is set to inaugurate the Solar Capital De Aar solar farm in the first quarter of 2016, which is the largest solar farm ever completed in the Southern Hemisphere, Africa and the Middle East Region. All power generated from this 175MW project will be exported into the national electricity grid. This farm employed over 2,000 local people at peak, and will now produce enough electricity to power approximately 75 000 South African homes every year. 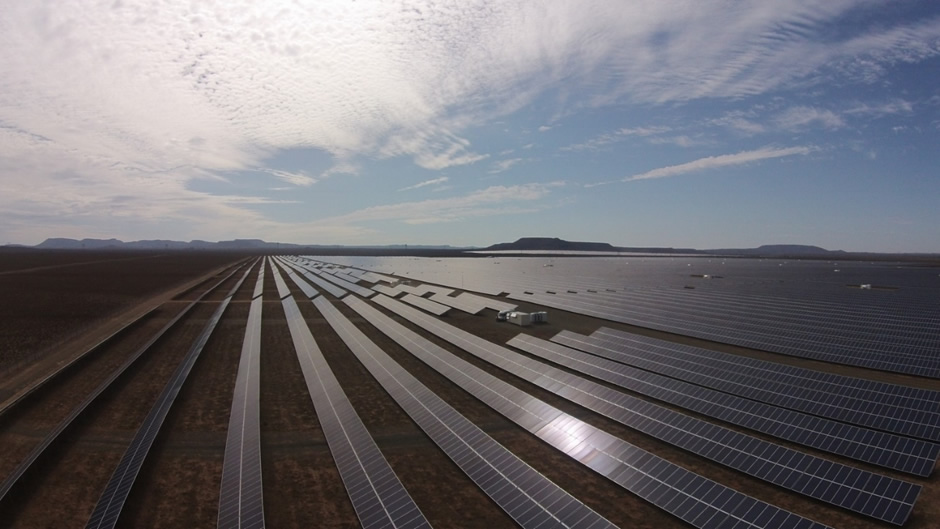