The aphorism ‘a rising tide lifts all boats’ is associated with the idea that improvements in the general economy will benefit all participants in that economy. It is especially relevant in terms of Renewable Energy (RE) and the youth it empowers through socio-economic upliftment intiatives. Take 21-year-old Chardin Booysen, for example.

Born and raised in the northern Karoo town of De Aar, Chardin experienced what many matriculants are subject to: Little prospect of further education, and no jobs to secure their economic livelihood. Where many young people would flounder – substance abuse, child neglect, crime and a host of other social ills plaguing previously disadvantaged communities throughout the country – Chardin was fortuitously drawn into the Community Development Workers (CDW) Programme funded by Solar Capital.

CDWs are public servants whose purpose is to strengthen the coordination between services provided by Government and access to these services by previously disadvantaged communities. “There are many CDWs serving the Emthanjeni Municipality where I live. We have meetings once a week and, on average, 24 people from the community, young and old, are in attendance. The meetings are co-faciliated by myself and my colleague Janet Matthee; to a degree, you can call it group therapy. As you can imagine, many issues arise, and where necessary we refer cases to social workers or psycohologists – people who are more skilled or qualified than us to be of assistance.On a personal level the programme also aims to boost the self-confidence of the participants involved, as well as assist them in developing sought after workplace skills.”

Having been a CDW since the start of 2015 – “it feels wonderful to be able to serve my community in this manner” – Chardin’s own growth in confidence and progress serve as a shining example.

“I got to know the staff at Solar Capital quite well, including Abner Wagenaar, the Local Economic Development Manager at Solar Capital. Abner called me to see if I was interested in becoming an IT facilitator at the Solar Capital Community Centre in De Aar. Because I had taken IT at school through to matric, this was a great opportunity for me.”

Him and Janet, 23, originally chosen to become facilitators because of their leadership skills, were offered a month-long online computer and IT literacy training course through Vaal University of Technology.

“We completed this course and are now assisting anyone who comes to the Community Centre with any challenges they may have with using the computers or free Wifi at the centre.I can help people learn, improve their grades at school, and use the Internet to be creative, start their own initiatives or find jobs for themselves. It’s very satisfying.

“Doing the CDW training as well as the course made me look at the world differently. It taught me that you can’t just wait for your circumstances to change, you have to get out there and make opportunities work for you.

“I also learnt a lot about myself and developed a greater sense of self-worth. I was shy before this and didn’t enjoy discussing issues with strangers, but through this programme I learnt how to express myself and open up to people.I now know I’m capable of not only changing my own circumstances, but also helping other people. All circumstances are changeable. Don’t let yourselves drown in them. There is always hope.”

How does he view the future of South African youth?

“I think there is hope through education. Many young people I know just sit at home and don’t even go to school, they use drugs and they rob people. Young people must first finish school to enable themselves to get into the working world, but they must also open up their minds to further information available to them on the Internet. You can learn just about anything online, including doing online tertiary courses, if you are given this opportunity. By being exposed to different viewpoints you are able to learn and improve your own life and be happier than you were before. Our youth need to learn that success is not easy, you need to work for it. If they are guided in the right direction, this generation will be able to achieve a lot more than they believe they are capable of.” 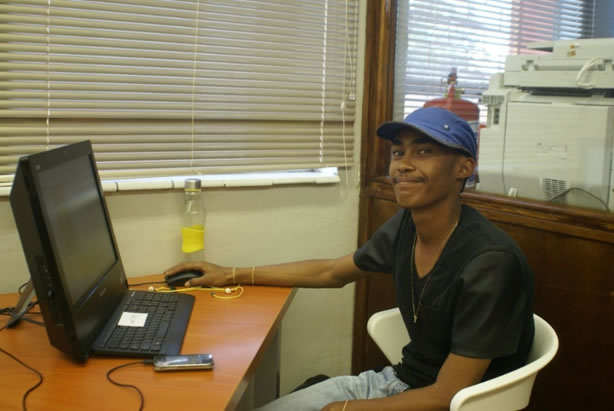 Chardin Booysen at the Solar Capital IT facility in the Community Centre, De Aar